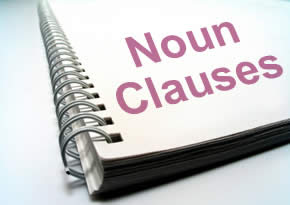 Anticipated problems: They may experience some difficulty to distinguish between noun clauses and
relative clauses.


Objectives: By the end of the lesson, students will able to;

-underline a noun clause in a sentence
-complete the sentences using the clause given.
-Change the questions into noun clause
-write their own noun clauses.

Teacher explain the importance of noun clauses
Teacher writes some sentences on the board and underlines the parts of the speech to show the
functions of a noun.

Teacher writes several sentences on the board.
Underlines the nouns in each sentences
Teacher explains that a noun clause is a dependent clause that work like a noun.( as a subject,object, the object
of preposition or the compliment of a subject
She explains how to form noun clauses with question words (when, where, why, how,...)
She explains how to form noun clauses begin with that, if or whether
Teacher distributes handouts which include fill in the blank exercises.
The students read the sentences and select the correct answer.
distributes another handout which includes exercise related to noun clauses
The students and the teacher work on the exercises.
Teacher asks the students to write their own sentences by using appropriate relative pronouns provided. 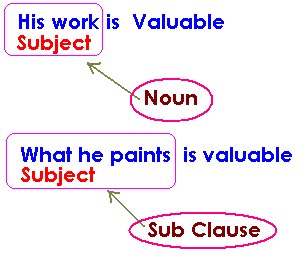 Today's topic is noun clauses. I have to warn you in advance that if you decided to tackle this area, my experience has been that noun clauses are complex and difficult to teach! They are even more difficult to explain but I'll try to be as clear as possible and break them down gradually.
A noun clause is a dependent clause that works like a noun. You can find it as a subject, object or the compliment of a subject. Because of the variety of noun clauses, today I'm only going to try to discuss noun clauses as they are used as objects. Furthermore, in this article, I will confine the discussion to one aspect of object noun clauses: the 'that-clause'. I will offer an activity to teach these types of noun clauses.
To refresh your memory, a noun clause as an object might look like this:
Intro/Independent Noun Clause/Dependent
Subject Verb Object
He knows that noun clauses are difficult.
There are three types of common noun clauses, which I'll eventually cover.
That- clauses, which are like the example above.
If/whether clauses:
I don't know whether/if my students have studied noun clauses before.
The teacher must determine if they are ready to study noun clauses.
Wh- clauses that begin with words like who, what, how, whenever, which, etc?/font>
I don't know which noun clauses to teach.
First you need to explain what a noun clause is.
As for punctuation, the intro clause determines whether it's a question or statement.
Now here's where it starts to get tricky to teach. How does a student know what tense to put the verb in the noun clause. Here's what I mean:
At yesterday's meeting, the teachers all agreed that teaching noun clauses is/was a difficult problem.
I don't know about you but I have to think twice about which verb to choose. In most cases, any tense of the verb in the noun clause is grammatically acceptable, but it often changes the meaning in ways that are too subtle to teach to your students.
The teachers agreed that teaching noun clauses is difficult implies that in general noun clauses are difficult to teach.
The teachers agreed that teaching noun clauses was difficult implies that it was a difficult at that particular time when they taught it.
That Clauses
That clauses are made from statements and are introduced by the word that. Now we have to kick it up another level because of the indirect object problem.
Sometimes we have sentences that begin such as, I agree that . . . , He concluded that . . . I noticed that . . .No problem, right?
But can we say, I assured that . . . I convinced that . . . I notified that . . . I reminded that . . . ? Of course we cannot. We must use an indirect object. I assured my students that they could handle noun clauses. I convinced them that it wasnëª so difficult.
Then we have some verbs in the intro clause that you have the choice to use an indirect object or not. But the preposition 'to' is required.
I proved (to the students) that they could grasp this concept. I mentioned( to them) that we other students had done well with noun clauses.
Finally, there is the case when the indirect object is optional.
I promised (them) that the test would be easy. I promised (them) it would be short.
So let's get organized and set up a chart of the four groups and their different situations.
Intro clause: no indirect object needed.
Common verbs include: agree, answer, notice assert, conclude, know, realize, state, think . .
Everyone knows that English is an international language
2. Intro clause: indirect object optional but if used, needs the word 'to'
Common verbs include: admit, explain. mention, point out, prove, reply
I explained ( to my boss) that my computer crashed .
3.Intro clause: must use indirect object
Common verbs include: assure, convince, inform, notify, remind, tell . . .
I reminded him that he had an appointment today
4. Intro clause: indirect object optional
Common verbs include: promise, show, teach, warn, write
He showed (the class) how to make soup
Now there is yet another complication: After certain verbs and adjectives in the intro clause, the verb in the 'that-clause' is expressed in the simple form. Hereë© an example:
The ESL conversation instructor urged that the students be more talkative. He insisted that they not waste time looking in their dictionaries. It is necessary that each student speak more to other students.
Here are some of the verbs that cover this case:
Advise, ask command, demand, direct, insist, move, propose, recommend, suggest, urge
Here are some adjectives that cover this case:
Advisable, essential, necessary, important, urgent, vital
I know that's more than you ever care to know about this topic so in case you are still with me, here's an activity to get your students some practice with 'that' clauses.

If you are using this as a speaking practice activity you can put the questions on one card and the response on another card and pass them out at random in small groups. Or put all the questions in a pile and have students take turns picking up a question card and the next student must answer the question with a suitable noun clause. The above example is short so you'll have to create some more situations to practice with but it should give you an idea about how to get started teaching noun clauses that begin with 'that'.

Oshima, A. and Hogue, A.(1999) Writing Academic English Longman

Exercise 1: Change the questions to a noun clause.

Please complete the following sentence using the clause given.
For example:
I should study more.
My teacher told me that I should study more.
1. Coffee is good for you.
I don't belive
2. Maria used to live in Sweden.
I doubt
3. All the students will pass the test.
We hope
4. It might rain this weekend.
Everyone is sad
5. All the students know where the library is.
The teacher assumed
6. Harold will write more noun clause quizzes.
I think

Fill in the blanks. Do not use capital letters.

Meral
Hello!Welcome to my blog:))My name is Meral.I'am an English teacher. From Turkey,but currently living In Cyprus (Turkish part). I am married and mother of two wonderful kids.